The Top 5 Wednesday Weekly Meme/Tag was created by Lainey (gingerreadslainey) and is now moderated by Sam (ThoughtsOnTomes). To learn more about this tag and how to participate check out the group on Goodreads here. I previously filmed a couple of these videos originally on my booktube channel but this is the first one in a blog format.

The topic I will be discussing today is:

First off, I must say that I’m dying to go to Bookcon…I’m almost tempted to fly into Chicago in the morning for the event and then fly home that same evening. In any case, these are the Top 5  Authors that I would love to meet and that I have met before but given the chance would love to meet them again. I’m still including those authors that I’ve met already even if it is smudging the rules just a bit. Starting off with…

I have been a fan of Richelle Mead since I picked up Vampire Academy back in high school. It did take me 3 tries to get through the first book. After I finished, I just kept reading and reading and waiting for the next books. I’m so happy that I got to continue in that world through her other series Bloodlines because I love Adrian and Sydney both separate and together and would love to be able to express my love of her storytelling and characters to her directly. I can’t wait to read Soundless and The Glittering Court.

Yesterday, Adam announced that he would be signing History Is All You Left Me at some unknown, as of now, time at BEA and when I read the tweet I may have danced around with

joy, that is until I realized that I wouldn’t be attending. I loved Adam’s debut novel, More Happy Than Not. It was such an amazing book that really pulled you in and kept you reading and that TWIST near the end…it hit me like semi-truck. Very impressive for a debut novel! I have already met Adam a couple of times, once at Geekycon and then again at the Decatur Book Festival last year. I wouldn’t pass up another chance to say Hi and have a quick chat with such an amazingly awesome writer and human being about anything at all. Though Harry + Cedric might be near the top of the list.

*** To Adam, are you sure you don’t want to give up your screen name for fanfiction.net. I will not give it to anyone else. I promise!***

Divergent is hands down one of my favorite YA Dystopian series. I love this series with all the scientific elements, especially the serums, something about them is just a really intriguing idea to me. I would also, and I know I’m going to get some questionable stares at the computer screen for this, thank her for the ending because, in my opinion, it ended perfectly. I would love to meet her and thank her for creating such  an intriguing dystopian world.

Another author that I have already met, though the last time I met here she had just released Clockwork Prince, so it’s been awhile since I’ve listened to here speak about her books. I have so many questions I could ask her about her new series The Dark Artifices. Lady Midnight took the cake as my favorite of the Shadowhunter Chronicles and gave me a brand new book boyfriend by the name of Mark Blackthorn. I would to love to chat with her again about her inspiration for the new series and where she draws from in order to keep creating new aspects of the Shadowhunter world.

And once more….I was fortunate to meet Jenny Han at Geekycon. I had read her series The Summer I Turned Pretty and

I had just finished To All The Boys I Loved Before. Since leaving Geekycon last year, I finished P.S. I Still Love You and I feel like I just want to meet her again and tell her all about the feels these books gave me! I really wouldn’t mind if she has a 3rd book up her sleeve somewhere. Her writing style and storytelling gives the characters such a relatable feel and I love that connection when I read these types of stories. Love her!

If you have reached the ending of this blog post, I want to say thank you for reading my blog in it’s early stages. This is the first T5W post and I hope to have one up for every Wednesday in May as a sorta of beginner blogging goal for myself. In the comments, let me know what authors you would hope to meet at BEA & Bookcon or just in the general sense. Write to you all soon! 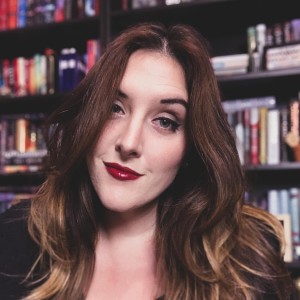 HAPPY ONE YEAR ANNIVERSARY TO THE WHIMSICAL NARRAT

📖☕️”Kaz leaned back. "What's the easiest

✈️The world is a book and those who do not tra

📖☕️”Kaz leaned back. "What's the easiest

✈️The world is a book and those who do not tra

📖BOOK REVIEW📖 • Within the pages of Vile &